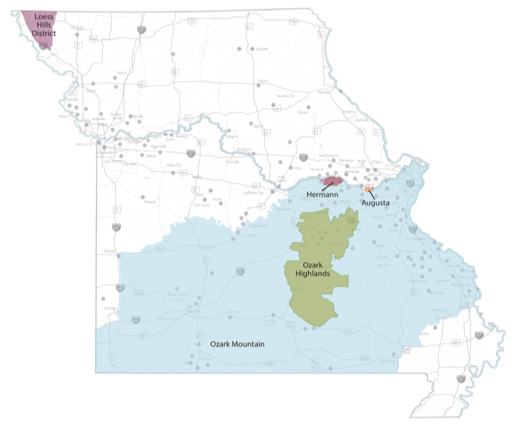 There are many ways to find your perfect bottle of wine — such as choosing a favorite variety or reading tasting notes. You can also select wines by region, which is often indicative of the quality from the terroir found there. Around the world, wine enthusiasts have (legally labeled) specific regions where high-quality wine grapes are grown called appellations. While each country has its own set of names and laws for its appellations, in the U.S. these regions are referred to as American Viticultural Areas (AVA). These designated wine grape growing regions in the United States are distinguished by unique geographic features, such as soil, climate and overall terroir of the area, and their boundaries are defined by the Alcohol and Tobacco Tax and Trade Bureau (TTB). The very first AVA designated was not California’s Napa Valley, but Missouri’s own Augusta region.

Today, the Show Me State is home to five AVAs. Each region boasts unique history and geographic features which makes it ideal to grow wine grapes. Let’s take a deep dive into each Missouri AVA, and its road to appellation.

Fifteen square miles of land near the Missouri River just west of St. Louis made history as the first officially designated AVA. The TTB recognized Augusta’s unique soil, climate and winescoupled with the area’s long history as one of the country’s oldest wine and grape districts in the state. Augusta’s wine history dates back to the mid-1800s when German immigrants settled the area. The petition to recognize Augusta as an AVA was filed by the proprietors of Mount Pleasant Estates and Montelle Winery on Oct. 12, 1978. Lucian Dressel, a young winemaker from Mount Pleasant, played a very important role in the process and helped prepare the petition. He dreamt of Missouri’s terroir being recognized by appellations identified similarly to other famous wine regions in the world (e.g. French Appellation d’Origine Contrôlée.) In the petition, the Augusta vineyards wrote about the loess and glacial till soils, which made the rolling hillsides ideal for wine grapes. The hills themselves were mentioned, as the “the irregular ridge of hills which rise approximately 250 feet above the fertile vineyards on which the grapes are presently planted,” kept certain areas within the proposed district “virtually free of spring frost.” When the news came that Augusta would be recognized as the first AVA several supporters wrote to the bureau asking to hold a public hearing, so that Augusta, Mo., residents could fully understand and support the appellation. One such letter penned by the Director of the Missouri Department of Agriculture Jack Runyan said, “I cannot stress the importance of your decision to Missouri agriculture and especially the vintners of our state.” Today, the number of wineries in the Augusta region have quadrupled. Yet, the Augusta AVA still delivers small town charm, stunning views of the Missouri River Valley and of course high-quality wine created by the region’s unique features and long history. 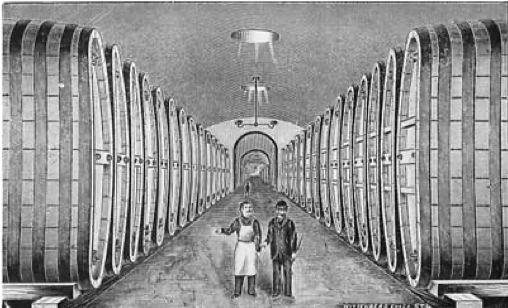 German immigrants first settled along the Missouri River Valley area in the 1830s. They soon planted vineyards, and today Hermann is one of the most historic wine regions in the state. The official AVA includes 51,200 acres surrounding the town of Hermann, located between St. Louis and Jefferson City. The petition submitted by Stone Hill Winery and Bias Winery touted the regions well-suited geography for high-quality grapes. Dr. ArthurE. Gaus, University of Missouri’s professor of horticulture and state fruit and vegetable specialist, wrote that the Hermann area has several temperate factors crucial to the success of a vineyard, including “adequate number of growing degree days, optimum summer temperatures and elevation with respect to the surrounding areas.” The latter, Dr. Gaus said was the “most critical in the survival of the wine (during winter cold).” Other parts of the petition emphasized Hermann’s extensive history of grape growing and wine production, citing that by 1865 the Hermann winery business had become lucrative that local vintners excavated massive caves to store and age their wines. Many wines from that region had already garnered prizes at wine competitions around the world by the time they submitted their proposal to TTB. Missouri State Senator Ralph Uthlaut, Jr., joined many state influencers in penning his support for the Hermann AVA saying, “Having lived in this area all of my life I am well aware of the wine making and grape growing history of this region. The early settlers of this area were aware of the favorable environment for these industries and established several wine making businesses and vineyards on the hills surrounding the town of Hermann.” In 1982, the Hermann wine industry was well-established with Van Moore, Bias, Hermannhof and Stone Hill wineries. Today, there are three times as many wineries to enjoy in the region and many unique Hermann Wine Trail events that set this AVA in a class of its own.

The Ozark Mountain AVA is the largest appellation in the state. It covers as vast 3.5 million acres from southern Missouri stretching into northwest Arkansas and northeast Oklahoma. The Ozark Mountain AVA actually contains several smaller AVAs within its borders, including Augusta, Hermann and Ozark Highlands. During the official petition process, the proposed borders of the Ozark Mountain AVA were amended a few times. However, supporters stressed the unique geography of the Ozark region carved out by the receding glaciers and the areas deep roots, regional culture and climate. “With four different climatic regions pressing against them, the Ozarks serve as a sanctuary for a selection of plants and animals from all sides …,” penned viticulturalist Keith Striegler in support of the petition. Today, you can enjoy wines from the sixth largest AVA in the country at many of the state’s southern wineries.

The Ozark Highlands AVA encompasses more than 1 million acres in south-central Missouri. It covers portions of 11 counties and includes St. James, Mo. The original petition for the appellation was prepared by seven bonded wineries in the area: Carver 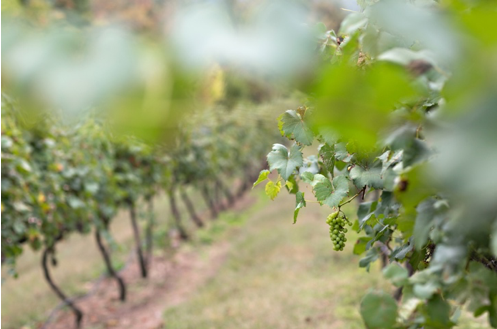 Wine Cellar, Ferrigno Vineyards and Winery, Heinrichshaus Vineyard and Winery, Peaceful Bend Vineyard, Rosati Winery, Reis Winery and St. James Winery. According to the petition, the Ozark Highlands AVA region was synonymous with grape growing for quite some time with the abundance of roadside stands, the history of Welch’s Foods Concord grape production in the region and a booming commercial wine market established in the early 20th century. Commissioner Mario A. Pertici writer for the IlPensiero, an Italian-American newspaper, wrote his enthusiastic support for the Ozark Highlands AVA. “I have been visiting Rosati (originally Knobview, Mo.) since 1926 and have enjoyed all my associations with these fine people for years. Needless to say, their Concord, Catawba, Delaware and Cynthiana wines have done well through the years. Their harvest time in September is especially a wonderful time to visit this great area, only 90 miles from St. Louis.,” he wrote. Today, he Ozark Highlands AVA is still a great place to taste Missouri wines. For a quick trip and some great sips down I-44, visit the St. James area.

A narrow region along the Western banks of the Missouri and Big Sioux Rivers in western Iowa and northwestern Missouri is the newest AVA. It includes nearly 13,000 square miles. The “Steeply Rolling Loess Prairies,” as the petition describes the region, is unique because the loose, crumbly loess soil is as much as 300 feet in places, which makes it the thickest loess deposit in the U.S. The deep soil has enabled grape vine roots to reach deep into the soil while draining quickly, and wine grapes have grown in this region for more than 150 years.

We encourage you to explore Missouri’s AVAs and the unique wines they each have to offer. Check out this interactive AVA map from the Alcohol and Tobacco Tax and Trade Bureau and starting exploring Missouri wines.