River Ridge Winery is situated in a century old farm house and nestled in the hills above the Mississippi River. The hand-tended French Hybrid and Vinifera grapes grown on the hills behind the winery produce wines of the highest quality.

Rob and Denise Bullock purchased the winery from Jerry and Joannie Smith on May 1, 2016. Jerry bought the 80-acre farm and began planting grapes in 1980. The doors opened September 17, 1994. As the winery grew expansions and updates were completed including the addition of a new wine production building, the addition of the Fermentation Room Cafe, the completion of the Nunnelly Pavilion, the addition of the two-tiered patio with fire pit, planting the Vinifera vineyard and more recently, the installation of wine hut, second pavilion and beautiful terraced brick patios overlooking the main patio.

For over two decades River Ridge Winery has been a delightful destination for its customers and friends wanting to enjoy great wine, great food, and an enchanting atmosphere perfect for a relaxing afternoon. 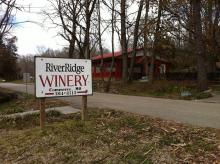