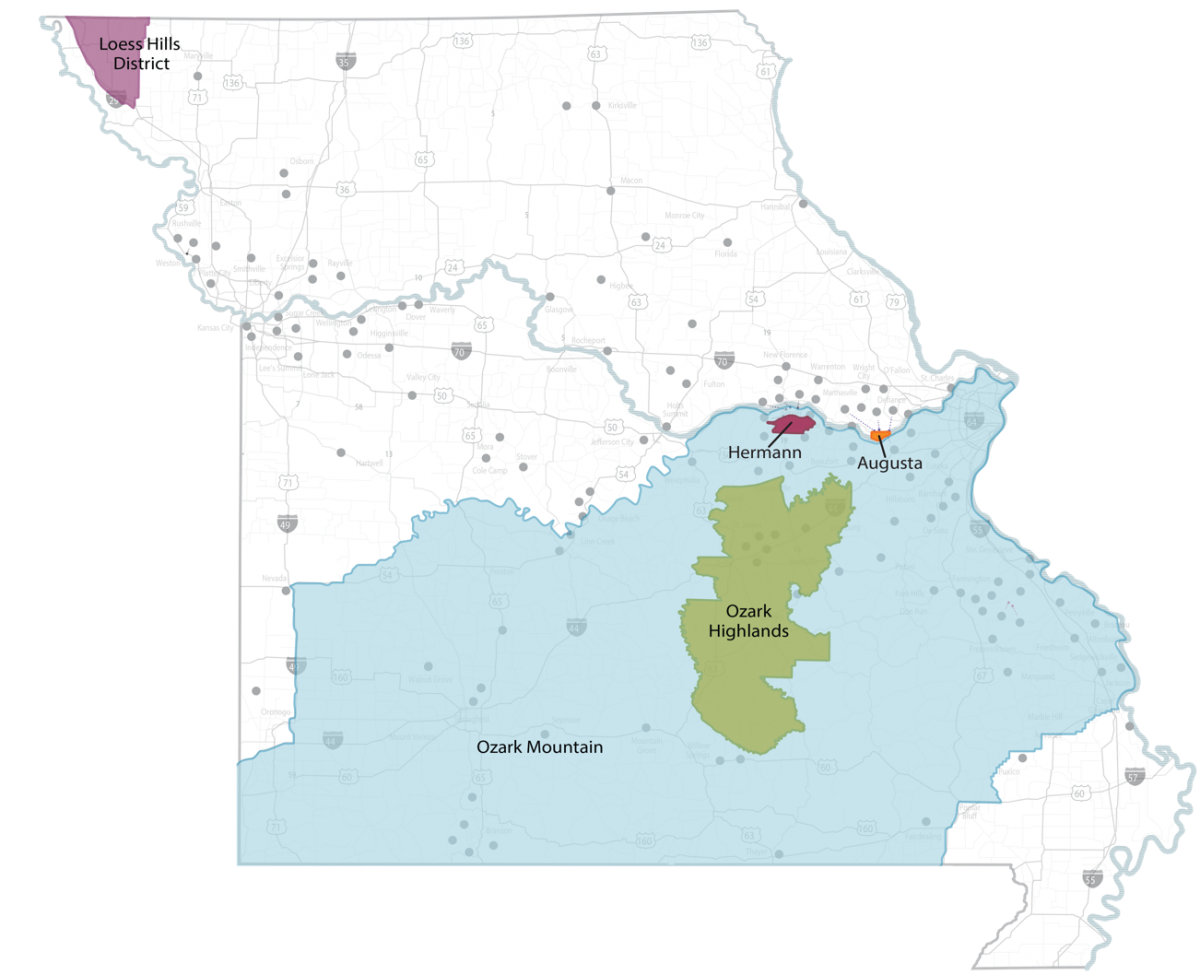 A bottle of wine tells many stories. The first chapter revolves around the origin of the grapes. Many regions around the world are historically known for their grape growing and the quality wines they produce. Napa and Sonoma are two of the most recognized appellations or American Viticultural Areas (AVAs) in the nation.  But did you know that the honor for the first AVA was bestowed on Augusta, Missouri?

An American Viticultural Area (AVA) is a designated wine grape-growing region in the United States. An AVA is distinguished by geographic features, with boundaries defined by the Alcohol and Tobacco Tax and Trade Bureau (TTB). Missouri is home to the country’s first designated AVA.

Viticultural areas allow winegrowers to more accurately communicate the origin of their wines to their consumers.

Federal regulations require 75 percent or more of wine be derived from grapes grown within the TTB-established AVA boundaries in order to designate a wine with the name of an AVA. The wine must be fully finished within the labeled appellation.

AVAs in Missouri include:

Augusta AVA
The first AVA in the United States was accorded to Augusta, Missouri on June 20, 1980. Seven California districts and one in Oregon had filed applications with the Bureau of Alcohol, Tobacco and Firearms; however, the honor went to the 15 square mile area surrounding Augusta. The bureau cited the unique soil, climate and wines, as well as Augusta’s long history as one of America’s oldest and foremost grape and wine districts.

Hermann AVA
The Hermann AVA was recognized on February 27, 1987 and consists of 51,200 acres in the Hermann area between St. Louis and Jefferson City, Missouri. German immigrants settled the Missouri River Valley area in the 1830s and began planting vineyards in what is today one of the most historic wine regions in the nation.

Ozark Highlands AVA
The Ozark Highlands AVA was designated on September 30, 1987; although the grape growing tradition goes back to the 1870s. The fourth accorded AVA in Missouri encompasses 1,280,000 acres in south-central Missouri, covering portions of eleven Missouri counties including the town of St. James, Missouri.

Loess Hills District AVA
The Loess Hills District AVA was established on April 4, 2016 and consists of 12,897 square miles of loess-based hills comprising a long, narrow region along the western banks of the Missouri and Big Sioux Rivers in western Iowa and northwestern Missouri. The topography is characterized by rolling to steep hills. The deep loess enables grapevine roots to reach deeply into the soil and allows water to drain quickly.

Any person or group can file a petition for a new or modified AVA. The TTB has created an AVA Manual for Petitioners that provides guidance on preparing a petition and collecting and evaluating information regarding distinguishing features. Establishing a new AVA can take years to complete and requires both patience and persistence from both the petitioner and the TTB.

Next time you’re shopping for Missouri wine, check out the labels to see which ones originated in one of the five AVAs.