Nestled in a quaint, sleepy town inside a pre-American Revolution building, LaChance Winery of Kimmswick is a natural extension of the LaChance Vineyards of De Soto that Harold and Tami Hamby established on their 80-acre plot in 2012.

LaChance Vineyards is steeped in a rich history. It is a family-owned and-operated passion project, founded on property that has been in the family for decades. The Hambys named the vineyards in honor of Harold's great-grandfather, Ferdinand “Zep” LaChance (pronounced la-SHONTZ), whose good nature and eternal optimism are reflected in the restful, family-friendly atmosphere. The vineyards now include nearly 5,000 grapevines from which the family produces "some of the finest wines in the country."

Harold, Tami and their son Hayden now offer their wines, along with the wines of select West Coast partners, at LaChance Winery of Kimmswick. The winery building, known as “The Old House,” was built circa 1770, several years before the Founding Fathers fought to emancipate the American colonies from the tyranny of King George.

The walls of LaChance Winery of Kimmswick feature artwork depicting historic figures such as General Ulysses Grant, who frequented the tavern once housed there while stationed at Jefferson Barracks. If these walls could talk, they would tell tales of history-making tacticians, formidable men and secrets of a young country's formative years.

The cabin-style structure of The Old House retains much of its original charm and promises to be the very heart of epic events for many more years to come. Located just 20 minutes south of St. Louis, it is also the geographical epicenter of a region steeped in a burgeoning wine tradition.

Stop in for tasting, a glass, a bottle and a bite of fine cuisine. You will have your own stories to tell… 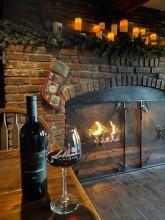